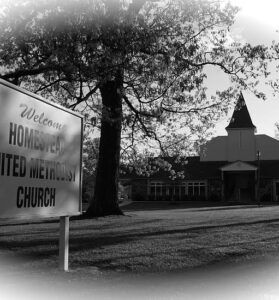 Cumberland Homesteads was started during the Great Depression as a means of putting unemployed families onto their own farms and to give them jobs.  Homestead United Methodist Church grew out of a desire for a Methodist Church in the community.  Our historic sanctuary was originally on the grounds of Camp Forrest in Tullahoma, Tennessee.  After the second world war, as areas such as Camp Forrest were being decommissioned, the Methodist folks of the Cumberland Homesteads were able to acquire the chapel from the camp.  The building was taken apart, each piece of the building being numbered.  It was then trucked to the corner of Highway 68 and Deep Draw Road, where it was reconstructed in the exact order it was deconstructed at Tullahoma.

Through the years, many people have worked, planned, and helped to make this church what it is today.  A legacy of service to the people of this community and all of Cumberland County has continued through the years and to this day.  Such Christian acts of service as the Community Food Pantry, Vacation Bible School, and scout hosts only name a few of these activities.

Franklin D. Roosevelt was elected President in 1932. The United States was in a depression. He saw the country was in an emergency and among his plans was one to establish and locate "Subsistence Projects" all over the United States. He wanted to get people out of cities and into rural areas, to provide work for them to create farms and supplement their income. "In working they would regain respect and live better."

He persuaded Congress to pass a bill and appropriate money for this. The Cumberland County farm agent Bob Lyons knew the area well and believed that a subsistence community could be self-contained. The ground sands and timber were perfect for building houses and barns and there was plenty of land for farm animals. Mr. Lyons received the help of a group of businessmen in Crossville.

All was approved, and their plan was presented for a subsistence community to be located here in the project that would be called Cumberland Homesteads. It originally was 10,000 acres and more acreage would be bought later. The first home for the settlers was to be the barn- (the selected Homesteaders would live in the barns until their houses were completed). Plans for a Co-op store, factories and small farms were all made by the government. BUT, no provisions were made for a school or church. The government planned to have the county take care of the school, but no plans were made for a denominational church.

By the early Summer of 1934, everything was moving along very well, with a lot of enthusiasm, a dream was coming true and a community they wanted their children to grow up in was happening.

Soon the thoughts of wanting a church was growing, so on Sunday afternoons everyone would gather at the Sawmill building and have a church service with visiting ministers. When it rained they crowded into a shed (this is the present site of Edna Stubbs' home).

The Homesteads men had donated their labor after work and on Saturdays and Sundays and with the government furnishing lumber and other materials, had completed the first Homesteads Elementary School. It was at the corner of Turkey Oak and Deep Draw Road. School began in October 1934. The school building was used for all community gatherings and, as they were a non-denominational community church group, the government permitted them to meet in the new school building on Sundays. They continued to meet there for all church activities until 1939.

The wife of Frank Foote (community manager of Cumberland Homesteads) was Methodist. The Rev. J.N. Wilson of First Church visited the Foote house quite often. In many conversations Mr. Foote would often say there should be a Methodist Church on the Homesteads, and pointed out a site for it.

Historical records of our church state the Homestead Sunday School was organized November 4, 1945. Several more meetings took place and as of January 20, 1946 there were 63 charter members. Rev. Wilson served as Pastor for the next 6 months, receiving $50.00 per month.

In February of 1946 the trustees met at the home of Helen Wehrle and Zena Walker. A letter from Mr. Foote and the National Housing Authority about lot #306 was read. It was approved by unanimous vote to approve $675.00 for the new church. This would be paid after a qualified architect drew plans to be submitted for the congregation's approval. The plans were submitted to the National Housing Authority through Mr. Foote for approval. When all this was completed Ms. Helen Wehrle was authorized to pay Mr. Foote $675.00 for lot #306.

On August 7, 1946, the United States of America deeded lot #306 to the trustees of the Cumberland Homesteads Methodist Church.

On December 6, 1946 they bid a sum of $1,500.00 for the purchase of a chapel from Camp Forrest in Tullahoma, TN, but it had to be dismantled, moved and reassembled.

The chapel at Camp Forrest was awarded to the Cumberland Homesteads Methodist Church. The $1,500.00 was borrowed from the conference with the government eventually refunding all but $936.00.

On March 2, 2005 the new addition (which is where our classrooms and nursery are located) were finished. In 2007, a charter member of the church, Mrs. Faye Anderson, willed her money to the church; and as of August 2008, the church was debt free. All loan balances and credit lines were paid off.

Being now debt free, in March 2009 the new addition was dedicated.